Because we can’t use the same partials to tune A0 and C8, there must be at least one partial change in every tuning software system.

Different partials are used to tune different parts of the piano.   The partials used are designed into the software.
Therefore, all tuning software systems contain partial ‘changes’.

A partial change is the ‘switch’ from one partial to another within the tuning.

Whenever the software switches from one partial to another during the course of the tuning, an error at that partial change is very likely.   Small errors of less than .3 c. are not much of a problem.   But errors of .5 c. and greater can easily be heard and can cause problems with the tuning.

The location of these partial changes will vary from system to system.

Partial changes are a universal issue.  Every piece of tuning software has them.  Using an AccuTuner and direct interval tuning, the errors can be measured and corrected.   And now the AccuTuner IV has a built in feature that can be used to easily and accurately correct all partial change errors.

The AccuTuner is the only piece of tuning hardware that can ‘do’ Direct Interval Tuning.

This new Partial Change Correction (PCC) feature on the SAT IV is specifically designed for checking each partial change and making any correction needed quickly and easily at any or all of the tuning’s partial changes.   This feature also works regardless where the partial change is in the AccuTuner’s tuning.

Since none of the other software only systems do direct interval tuning, this is a unique feature of the SAT IV.

Partial change locations are important and which partial used is also important.   But even more  important to the sound of our tunings, is for all of those partial changes to be correct and error free.

The first time I checked this was years ago on a Yamaha C7.   The biggest culprit on most pianos is the tenor partial change, so that was the one I checked.   But on that piano, and with the tuning I was using, no correction at the tenor partial change was necessary!   Someone made a good guess somewhere along the line, and the tuning I was using was a good fit for the piano.

But from what I know now, that was pure luck, because it happens so infrequently.   Sometimes we get lucky, like a broken clock being right twice a day.

It didn’t take me long at all to realize how unique it was to not have any correction needed at that tenor partial change.  All I had to do was keep checking.

Here are some partial arrangements found in some of the different tuning software systems:

Here is a graph of an FAC tuning with the partial changes circled in red:
(Click graph image to enlarge). 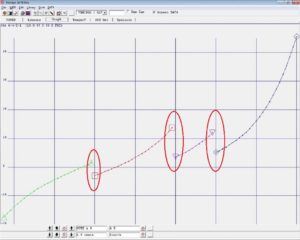 An FAC tuning uses the 2nd Partials from C5/B5 whereas this two partial arrangement uses fundamentals from A#4 – C8.  The use of the 2nd partials has been eliminated.

The two partial changes in this arrangement are found between G#2/A2 and A4/A#4. 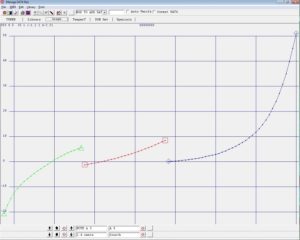 Eliminating the use of the 2nd partials in the tuning, leaves us with one fewer potential partial change error in the treble.

Eliminating the use of the 2nd partials in that area, also makes for much more speeding and accurate mapping of A5.
(More on that later in the posts on Mapping.)

Only the tenor partial change in this arrangement needs to be checked and corrected if there is an error.

This particular Two partial arrangement provides a full two-octave range (A2 thru A4) with all notes using their 4th partials.   This is accomplished by moving the tenor partial change from B2/C3 to G#2/A2.

Another advantage to this A2 -A4  type partial arrangement, is that note A2 is generally found on the bass bridge for all by the longer scaled pianos.   Using the same partial across the bridge break, and through the plain wire to wound string break, on all but the longest scales eliminates any partial change from occurring in the challenging tenor area of the piano.

This works well for 26-bass scales, whose bridge break is between notes A#2/B2 – with both A#2 and B2 now using their 4th partials.

This Two Partial arrangement was what I used for a few years before dropping the use of the 6th partials altogether.

This single partial change arrangement is what we use in the Littau-Conrad Tuning System.   This system uses the 4th partials from A0 – A4 and the fundamentals from A#4 – C8.

We have also eliminated the use of the 6th partials.   With this arrangement the 4th partial are used for tuning all the way down to A0. 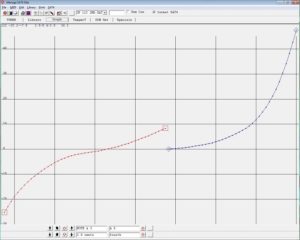 There seems to be some confusion regarding stretch and partials.

Put simply, the higher partials are less reliable than the lower ones.

The 6th partials on a group of bass notes can vary much more than the 4th partials on that same group of notes.   Of course this is piano dependent, but it definitely true on the shorter scales with lower quality bass string design and/or manufacturing, and uneven string lengths.

If we create a smooth set of numbers using the 6th partials, and if the 6th partials on a group of notes are uneven (unreliable) the unevenness will show up as uneven beat rates in the intervals that use the lower partials of those notes.   That includes the 6ths, 10ths, single and double octaves, 12ths, and so on.

Creating a tuning using a smooth set of 4th partial numbers in that situation makes the intervals using the lower partials sound much better.

I was made aware of this on a 4’6″  Tokai ‘Sherman Clay’ piano.   This was ‘the’ piano that caused us to eliminate the use of the 6th partials for tuning the bass.   At the time, my tenor partial change was G#2 (6th)/A2 (4th).   The tuning sounded good down to A2 using the 4th Partials.   After making the tenor partial change correction, I began tuning down into the bass, going down from A2 to G#2, to G2, F#2 and so on.   But my aural checks were awful!   The 3rds, the 6ths, the 10ths, 4ths, and 5ths, were really bad.   I went over everything, rechecked the tuning of the notes. re-measured and re-checked the tenor partial change correction, and then re-tuned those notes G#2, G2, F2 and so on.   Still awful.  Just as awful as it was first time.

But the tuning sounded good above the partial change.

I decided to try to use the 4th partials a little lower down into the bass.  I got out my pencil and paper and created a little extension of notes settings all using their 4th partials going down to F2.   I tuned them and, Voila!   There it was!   The intervals checked out down to F2.

But when using the 4th partials, even though the 6th partials were still unreliable, they weren’t really causing a problem like they were when I used them to tune.   This was a Eureka! moment for me.

We soon got rid of the 6th partials altogether.   We figured if they worked this well on a Tokai 4’6″, they would work just fine on a concert grand.   And they do.

Once I know where I want A1 tuned, I set the SAT to A3, play A1 and measure where it’s 4th partial is located.  Thats the setting I use for the tuning using the 4th partials.

As you can see, the amount of stretch down there has very little to do with which partials are used.   I can get both A1 and A0 where I want them, (the ‘stretch’ I want), get the notes tuned where I want, and measure them with the 4th partial and use that setting for the tuning.

This last chart is the partial arrangement of one of the tuning ‘styles’ created by the CyberTuner software.
(Click to Enlarge) 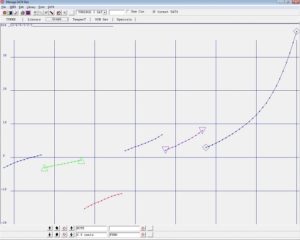 From everything I know, the above is just what you don’t want.   This 5 partial change arrangement has three of them in the lower half of the piano.

Even though this partial arrangement might work on some long scale piano somewhere, this 5-partial change arrangement, used on anything but the longest scales, could be problematical with its partial change ‘hiccups’, compounding on each other.

Many tuners using that system have mentioned that on the shorter scales have to tune the bass by ear.  The longer scales are more forgiving of this sort of thing.

It’s not only the partial changes, but its also the partials being used.

Even if someone were to pick up on the most likely errors at any of those 3 partial changes, without Direct Interval Tuning, it’s extremely unlikely anyone is going to be able to check, let alone correct, any of the partial changes.