By Joseph A. Herter 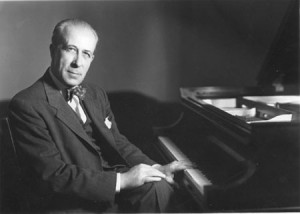 Both Stojowski and Labunski were consumed with teaching and gained reputations as highly respected and beloved teachers—Labunski in Memphis, Nashville and Kansas City and Stojowski in New York during the academic year and on the West Coast in the summer. The saddest thing the two men share in common is that they have been forgotten as composers in both Poland and in their adopted country.

Interest in the music of Stojowski is experiencing a renaissance. Wiktor Labunski’s music, however, still remains to be found only in encyclopedic sources instead of concert programs.

Victor Labunski was head of the piano department at the Kraków Consrvatory from 1919 to 1928. In 1928 he made his Carnegie Hall debut in New York. After teaching at the Nashville Conservatory in Tennessee from 1928 to 1931, he was a professor and director of the Memphis College of Music in Tennessee from 1931 to 1937. He became a teacher at the Kansas City Conservatory in Missouri in 1937, serving as its director from 1941 to 1971.

Wiktor Labunski, who served the Conservatory for a nearly a third of its 100-year history as piano professor, director and artist in residence, died in 1974. Now is the time to give younger generations the opportunity to share and reevaluate his music as well as to appreciate the legacy of this great Polish-American Kansas City musician.