Using a Custom Over Pull for Pitch Corrections 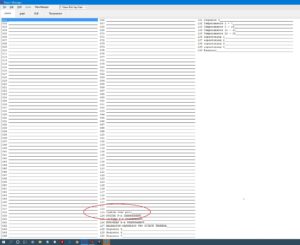 Programming a custom over pull is so easy it’s not worth making a video of it.

When entering the over pull ‘amounts’ on to page 123, the amounts are not Cents but Percents!

By default, when the SAT ‘stores’ a note to a page, it automatically steps up to the next note on that page ready for the next bit of information to be stored.

The amounts desired can depend on the pitch raising method.

To continue storing the same 12.5% over pull to the rest of the notes up to A3, just continue to press BlueShift + STO/MEM over and over again, until all the notes from A0 – A3 show 12.5 in the window.

That’s all there is to it.

The custom over pull is ‘activated’ just like the regular pitch raise feature, but instead of rolling off onto the BlueShift, after MSR stops the lights, roll off onto the Green Shift.  Rolling off on to the GREEN shift activates he Custom Over Pull and uses the amounts stored on Page 123.

Continue to roll off onto the Green shift button to use the custom over pull amount of 12.5% when tuning the notes on the bass bridge.   Some technicians will use this 12.5% over pull on the wound bichords found on the long bridge.   But most of the time, on most pianos, as long as there is no structural or rust damage, the wound strings on the long bridge can be pitch raised using the standard amount of 25%.

Just remember to turn off the Custom Over Pull when the pitch raise gets onto the long bridge!   If you forget and start pitch raising above A3, since there is no amount entered on Page 123 for A#3, there will be a zero over pull or zero pitch raising going on.   For this reason, it is a good idea to adjust the Display button so the offsets can be seen in the display during the pitch raising.

To turn off the Custom Over Pull, press MSR + Green Shift and the words ‘over pull off’ will be seen in the display.    Now when using the regular pitch raise, the standard over pull of 25% will be used

(Even though this feature is most often referred to as the Pitch ‘Raise’ calculator, it works in both directions.  A more accurate description might be ‘Pitch Correction’ calculator).

The more ‘measurements’ made during the pitch correction, the more accurate the pitch correction will be.  Making more measurements during that first pass may take a few more minutes but it can reduce the work needed to be done on the 2nd pass.   The method of making a fresh pitch raise calculation on every note has been referred to as a ‘pitch raise and fine tuning’ in one pass.   Well, maybe not a fine ‘fine’ tuning, but it comes close, with often times, very little else needed on the 2nd pass.   Mostly unisons.

Here is a suggested pitch raise method starting from the bottom and going to the top, tuning unisons as we go:

Working from a memory tuning, play E1 and press the MSR button to stop the lights.   Then roll off onto the Green Shift.   This Green shift tells the SAT to use the Custom Over Pull page for the offset on E1.

Then start pitch raising at A0, using that offset for all the single strings.

At the lowest or first bichord, make a new custom over pull offset – rolling off onto the Green Shift – and use that new offset for the next higher 5 or 6 unisons, or about half of the bichords on the bass bridge.

Then make another custom over pull offset and use that offset for the rest of the wound strings on the bass bridge.

Oftentimes, in the low bass, caution is advised on pianos that are terribly flat.

On these pianos, if the lowest notes are really out of tune, it’s probably better to start on A1 instead of A0 and work your way for that lowest octave.   More often than not, A1 was probably tuned by the last guy.  Also, A1 is easier for both us and the SAT to hear and for the SAT to give us a good workable pattern.

A little musical training can come in handy for this.   But all that is really necessary is to know how a major scale is supposed to sound, and the notes that make it up.

Play an A Major scale as you tune on down to A0.   A B major scale is easy too because it is all the black keys except for B and E.  So those 2 scales are all you really need to know.

Here’s what can happen down there if you’re not careful:

If using an FAC tuning, when the SAT is tuning A0 it will be ‘listening’ to the A0’s 6th partial, which is E3.   So, whatever pitch is being produced when playing note A0, the SAT will be listening for E3.

But, if A0 on the piano is actually sounding something other than A0, the SAT probably won’t hear an E3 pitch.  So there won’t be a usable SAT light pattern for tuning.

This is where the middle light of the SAT’s LEDs can come in handy.   If that middle light is showing any light, the pitch may already be sharp.   Remember the last guy may not have even tuned A0, or missed badly, or whatever.   So even though we think we are pitch raising, A0 and B0 and even B#0 may actually be sharp!

So, if we think we need to raise it higher, the next note above A0 that contains the pitch E3 is C1.  If we try to pull it up that high, the string will probably break.

Using our ears and those musical scales can prevent this type of tuner error that can cause string breakage.

On some pianos that we are called to tune, the placement of A0 can be a bit of a mystery.   Always error on the downside.   But again, using a musical scale and known intervals, and also starting on A1 and working your way down, should help put A0 in it’s rightful place.

Going the other way, which is not a string breakage type issue, but an error nonetheless, is if A0 is way low.   F#0’s 7th partial is E3.   So if A0 were tuned down that low, the SAT will pick up on that 7th partial of F#0.   But using musical scales should let you know very quickly that something is wrong with A0.   An easy way to check with the SAT is to go into the TUNE mode and step the notes down to C#3 which is the 6th partial of F#0.

You can also just go down by half steps and see if the MSR button will find the pitch of A0.   Once we know the note is flat, and about where it is, and unless there is some structural issue or some rust or whatever, it is probably going to be safe to raise A0 up to where it was intended.

Just be very careful down there.  It’s worth all the time you spend making sure A0 is @ A0.   Try to find out where A0 is before tuning it.   Chances are, once you find A0, A#0 and B0 will be in the same ballpark.

Play the A1/A0 octave, play an A Major scale going from A1 down to A0.  It should make some musical sense and if it doesn’t keep working with it until it does.   Musically finding A0 is the easiest way.   And once you get it close, the SAT should pick up on it and give you a pattern you can use for the tuning and pitch correction.

Get all the single strings in the ballpark and then measure a custom pull offset @ E1, then again at the first bichord, then again in the middle of the bichord section, and so on as previously described.

On pianos that are really flat, the notes are out of the range of the Auto Note Stepping feature.   I find turning off the auto note stepping makes things easier.   Since I don’t use a foot switch, I just use the note up button to go to the next higher semitone.

Sometimes too, if the piano is in relatively good shape, with no structural issues or rust, but has basically just been neglected for some years and is now really flat, bringing it back up to A440 is the goal.   However on those pianos that flat, the notes may be out of the range of the MSR button.  For these pitch corrections, without any real worrying about string breakage, after making a few possibly manual over pull calculations in the low bass (E1) and tenor (E3), using a single over pull in the mid range (A4) that was determined manually, and a single over pull calculation made in the treble (C6) manually will be the best and fastest way to get the piano into a condition where the regular pitch raising methods can be used.

Manually making 3 or 4 calculations and getting thru that 1st pass as quickly as possible should put the piano into a workable condition.   Again, starting from the bottom and going to the top, tuning unisons as I go.

Once that first pass has been completed, Al Sanderson said the piano’s pitch should have been improved by a factor of 10.  Meaning if it was 100 c. flat, after a pitch raise using these offsets, and starting at the bottom and going to the top, tuning unisons as we go, every note on the piano should be within 10 c.   Once every note on the piano is within 10 or 20 cents, both the MSR button will be easily in range for quick accurate offsets.

For the most accurate pitch corrections, recalculate a custom over pull offset on every note on the bass bridge.  It may take as few minutes longer, but the results are probably worth it.
When on the long bridge, use the regular pitch raise calculation of 25%.

Those same thoughts also apply to the long bridge as well as the bass bridge.

The exception may be in the high treble.   Sometimes at the very top of the piano, if the offsets get way up there, and the SAT may take a little too long finding the notes,  it might be wise to just set the SAT to 35 c. sharp and get thru the top octave or so using that single offset.   Making a measurement on every note up there isn’t worth it.   Just get it close and go on.   The pitch of the treble will be changing during the pitch raise.   Sometimes the last guy tuned them a m3rd or so too sharp.   So a good approach up there,  may be to just get them all into the ballpark and get it better the 2nd pass.

But on all the notes below that top octave, the most accurate pitch raise is to make new offset on every note.   Or of course, every white key, or every black key or every M3rd, and so on.  Al said this method should improve the piano by a factor of 10.   That means if the piano is 100 c. flat, it will put every note within 10 cents of where it should be.

The Custom over pull in this example is only used for the notes on the bass bridge.   But, if there is some concern about pulling the lowest bichords that are on the long bridge up 25%, of course the Custom over pull of 12.5% can be used on them as well.

Something to remember that applies to pitch raising:  Accuracy doesn’t come with speed, but speed does come with accuracy.