Mapping the Treble with Templates

Our system uses the 4th partials from A0 – A4, and the first partials or fundamentals from A#4 – C8.

Here is a complete graph of our partial arrangement: 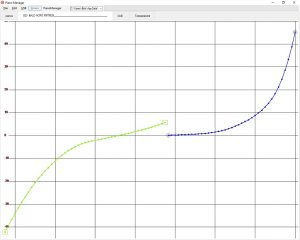 Another advantage to using the fundamentals from A#4 on up, is the elimination of any partials changes in the treble.

As in aural tuning, previously tuned reference notes from the lower half of the piano are used for mapping the treble targets.

Treble tuning can be very subjective.   The guidelines discussed here will give you some ideas. but don’t be afraid to experiment with the locations of all the treble A’s to find the best sounding targets for your tuning.

Using a Sequence for Mapping:

***A ‘sequence’ can be very handy tool for mapping the treble.  Since only select notes will be tuned to check the locations for both A5 and A6, it is nice to have a sequence programmed so the SAT will just go to the next note to be tuned rather than having to step up or down chromatically.   With a sequence, pressing note up goes to the next note in the sequence.  Pressing note down goes back to the previous note in the sequence.  ***

(Click here to view a video on how to program a sequence into your SAT IV.)

Good choices for all 3 of these targets can be found by playing D4 that’s already been tuned properly.

So simply set the SAT in TUNE mode to listen to A5, and then play D4 that has been previously and properly tuned.   Stop the lights with the SAT buttons, and write that number down.
That will be a good starting point for the location of A5.

Now set the SAT to listen to A6, play D4, and stop the lights with the SAT buttons.   Write that number down.   That will be a good starting point for the location of A6.

Do the same thing for A7.   Set the SAT to listen to A7, and play D4.   Stop the lights using the SAT’s buttons and then write that number down.

Now you have good starting points for targets A5, A6, and A7.

For years and years, I have used just the triple octave location for A7.  It’s not a bad spot.  It works and puts A7 sharper than many of the software programs in use today.   But since March 2020, I begun tuning A7 higher than that, using the triple octave +5th as the starting point for my A7 location.

My storing a sequence video linked to earlier in this post, shows how to store a sequence to your SAT IV.   In that sequence I only went up to A6.   But now I have extended the treble sequence in my SAT to include A7, D7 and E7.   The storing routine is exactly the same, it just has 3 more notes to store.   That’s all.

And the mapping routine for A7 is exactly the same for me with A7 as it is for A5 and A6.  For all 3 of those targets, after selecting a template with the targets I want to try, I tune the 5th below and use it to confirm or deny the location I’m trying.   After I feel the D/A 5th is OK, I then tune the A/E 5th below to confirm.

For instance when mapping A5 I’m using a template with the A5 number I want to try.  I tune A5 to the template and then tune D5 to the template and listen to the 5th that’s just been created D5/A5.  If that doesn’t sound I can easily just add some DOB to raise A5 up, then re-tune A5 and D5 and give it a listen again.

I write that A5 number down so I don’t have to remember it!

If I used DOB to increase the stretch a little bit using that template, I will probably just go ahead and tune A6 using that same template with the same DOB, and basically do the same thing only one octave higher.

If I felt I needed to raise A6 up higher, now is when I’ll switch to a different template (I don’t recommend using DOB for A6 or A7.   DOB not only moves A6 but it will also move A5).

At this point I would probably add 1 c. to the setting I just tried but didn’t like, and go to the template header sheet and find the templates that have that as the A6 number and the good A5 number I mapped earlier.

If not, do exactly the same thing:  Add 1 c. to the setting of A6 by going the template group with that A6 number and that still has the good A5 number mapped earlier. Listen as before and repeat this routine until a good sounding location for both A5 and A6 are found.

Now for A7.   You can always start with the triple octave +5 location measured earlier.    Look for a template in with the good A6 number that has that A7 number or slightly higher.  You’d be surprised maybe, most of the time, after tuning A5 and A6 like this, A7 will sound better a little sharper than the pure triple +5 location.

A7 is mapped and verified and confirmed just like A5 and A6.   When switching pages, try to keep the A6 location as close as possible.   If the A7 setting you want to try causes you to move A6 by .1 or .2 one way or the other, that’s no big deal for mapping.   You will still be able to tune A7 and D7, and listen to the 5ths up there to map A7 and use all the lower reference notes too for confirmation.

I’ll warn you though, the single octave will be beating pretty fast.   So if you’re wanting pure A6/A7 octave, this type of treble tuning isn’t for you.

My experience with this treble tuning has given me a ‘sense’ of when that beating is just too much and when it is acceptable.  I generally go higher and higher until I get a NO NO NO!  that’s enough signal from my aural brain.   Then I back it up.   But the D7/A7 and the A6/E7 5ths I find the most useful for mapping A7.   This might surprise you, but after doing this a while, a few of us who tune this way have commented at how easy it is now to hear and distinguish what we’re wanting to hear up there, and how it fits into the over all musical sonority and quality of the tuning.

I now have a new set of templates for a SAT 980 for tuning this higher stretch.  This new set is included in the Conrad Tunings file which is part of my Downloaded Tunings download.

This new set of templates will probably accommodate a triple octave stretch for the treble tuning.  But I’ve not done that with them.

The first new group of triple+5th templates was mostly a guess on what I might need.   I used those for 4 or 5 months while gathering some actual tuning data from mapping every piano I tuned.   In early September 2020, I redid them again, using the new found data.   That group was better at A7, but it didn’t have what was needed at A5.  I found myself having to use DOB too often for A5.

Hopefully the pianos I tuned from March thru October were a good enough sampling to guide me into the most likely ranges of numbers most often needed for this higher stretched treble tuning style.  Of course the longer I do this the more pianos I will have to give me information on any changes I might need to make in the future.

These templates can be used for just treble tuning.   Of course, you’ll need to have them or as many of them as possible installed into your SAT.  Again, if you have a SAT IV, and don’t use the HELP menu or any of the Inventronics protected tunings, ask Inventronics to upgrade your SAT to a 980!  Then you can do all of this stuff!

And for those of you who might be interested in purchasing a SAT IV, the 980 doesn’t cost any more than the standard model.  The 980 is simply a ‘reconfigured’ standard model.  All that’s necessary is how they program it before shipping it to you.  Call me and we can talk about it.

BTW, if you currently have a SAT IV standard model, it can be ‘upgraded’ to a SAT IV 980!   Just send it to Inventronics and they can reconfigure it for you.
The Standard Model SAT IV has about 400 pages of user available memory.
The SAT “980” has 980 pages of user available memory.
In order to get that many pages some aspects of the standard model needed to be given up.
After upgrading a Standard Model to a 980, the built in ‘HELP’ menu is gone.   It was a real memory hog that I never used and from what I can tell, not many others did either.  Getting rid of the HELP menu freed up a lot of memory that is now used for user available pages.
The other feature of the Standard Model that is given up when upgrading to the “980” is the Protected Inventronics Tunings.   Those Inventronics tunings were put in a separate area of memory and they were protected and could not be erased or overwritten.   Those tunings were all FAC tunings using the standard FAC partial arrangement.   I’m sure some technicians used those more than the HELP menu, but they were still just FAC tunings which the SAT can create on the spot of the exact piano being tuned!  I always wondered why someone would want to use an FAC tuning from some other piano, when they could just measure the piano in front of them and create it’s own FAC tuning.

All of this is contingent on not only having a SAT 980, but you’ll also need the Piano Manager software (Sorry, Windows PC only) which is the software needed to install these templates into the memory of your SAT 980.   The header sheets are included in the download as well.   The header sheets can be put into your Google Drive folder so they can then be viewed in your smart phone.